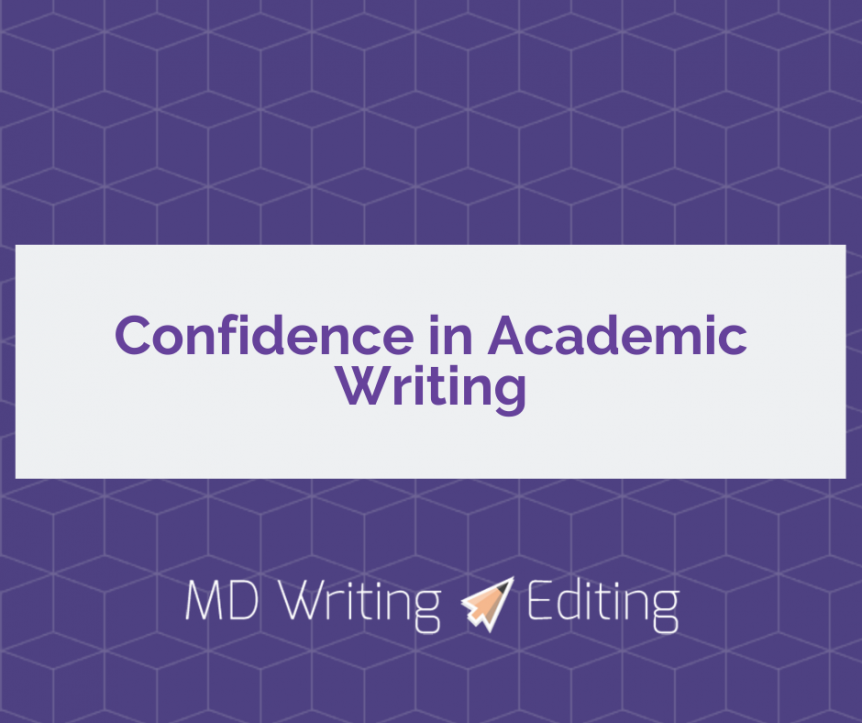 In this video, I share some quick tips on how to find confidence in your academic writing skills.

Today I want to talk about confidence when it comes to academic writing because, unfortunately, the reality is that for a lot of academics, a lack of confidence is what's holding them back from getting their writing done and getting it published. And I know this because I've talked to hundreds of academics over the years, and when I've asked them what their biggest challenge is with writing, it's not so much that they don't know what to do, they just don't have the time, which is another problem which I'll talk about on another video. But they also just lack confidence. That lack of confidence can come from so many different places.

It can come from a colleague or supervisor criticizing their work without giving any constructive feedback, and so it's just this constant negative message about their writing. It can come from journal rejections, which are obviously common in academia, but depending on the comments and the way the rejection was handled, it can leave the person feeling dejected and wondering whether they can even write, and if they're cut out for academic life. But it can also just stem back to your early years where maybe a teacher or somebody told you, you were terrible at writing.

These messages can come from anywhere. For some people, they're able to just brush them off, but other people really hold onto those messages and internalize them, and then tell themselves that they're not very good writers. The bad news is, there's no magic cure for building your confidence. You can do work on your mindset, obviously, to try and counter those negative messages. But I think the best way to overcome this is just to do more writing.

What I see happens quite commonly is that people who lack confidence just don't want to do the writing. So their strategy is just to put it off. Basically, for a thesis or grant, there's a deadline at some point, so the work gets done at the last minute, which means the quality of work isn't as good as it could be. But for people writing journal articles that can result in the paper never getting published. So I've met plenty of academics over the years who have had papers sitting in draft form on their computer for months, if not years, because there's no real deadline as such. And of course, with that lack of confidence and then not doing the work or doing it in a rush, that only reinforces the negative feelings and the lack of confidence. And so the best way is to tackle it head on and do some writing every day.

Now, I know it's hard to find the time, but when you are starting off, just do five minutes a day. Just find five minutes and treat it like a journaling exercise. So this is writing that's just for you. You don't need to share it with anyone else. You can just write something to do with your research, whether it's just articulating some thoughts you've had, summarizing a paper you've just read. It doesn't matter what it is. The point is, it's just for you to practice your writing and then you can delete it.

Or, I think it's better to keep it and then look back on it in a month's time and maybe put it aside, come back to it later and then try to be objective when you look at it and see, okay, what are the good things about this writing? What are the things that I can improve on? And if you keep this kind of journal, then you can look at it over a period of weeks or months and reflect on how much your writing has improved. But really, I think the only way to overcome a lack of confidence is just to do the work and keep doing it.

The other thing I would suggest is finding a writing buddy or someone who also wants to improve their writing, and help each other and support each other. So as an idea, you could just decide to send each other something to critique, once a month, it doesn't have to be a lot, but you can critique each other's. And editing someone else's work or giving them feedback is a really great way for you to learn to critique your own work as well.

So in that way, you've got someone safe that you can share the writing with. You know they're going to be kind to you and hopefully they'll give you some positive feedback and maybe point out some things that they thought could be expressed better, or that weren't clear, but in a way that helps you feel that you're learning from it rather than shattering the confidence you have. And if you can do this every day or at least a few times a week, I think you'll feel more confident in your skills.

In the end, our confidence levels are going to fluctuate from day to day and that's to be expected. But by doing this writing practice every day, I hope that you'll find your confidence levels increase over time. And with that increased confidence, you'll find yourself doing more writing, and the more writing you do, the more likely you are to finish your paper and submit it and get published. So I hope these tips have been helpful. I really encourage you to do some writing every day, to just know the only way to get more confident is to just keep doing the task and improving as you go along.